49 yo male who sustained a cervical fracture and spinal cord injury which was treated at an outside institution with open reduction and internal fixation through an anterior approach. The patient developed instrumentation failure with progressive kyphosis and dysphagia (difficulty swallowing) with recurrent aspirations, pneumonia, and hospitilizations. Preop xrays and CT demonstrate displacement of both strut graft and instrumentation with nonunion (the fusion did not heal) and collapse of the cervical spine into kyphosis. 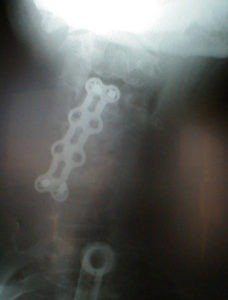 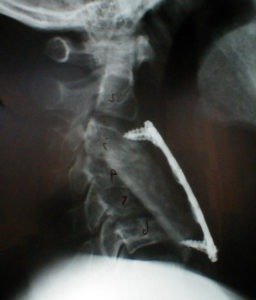 The patient was treated with a 2 stage surgical reconstruction. First, he underwent anterior removal of the instrumentation and strut graft which required extensive resection of the partially fused graft to the host bone. Multiple osteotomies were performed and the kyphosis corrected with traction and stabilized with a fibular autograft from C2-7. During the second stage a posterior spinal fusion and instrumentation was performed from C2-7 pedicle and lateral mass screw instrumentation. The patient had resolution of his dysphagia and aspirations and returned to home on a regular diet where he went on to a solid arthrodesis. 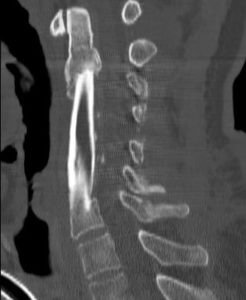 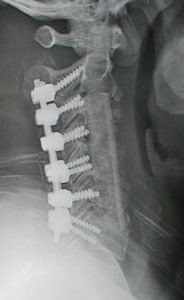 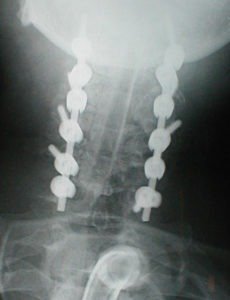 How Poor Posture Can Cause Neck Pain Osteochondroma: Symptoms, Diagnosis, and Treatment What are the Signs of Scoliosis in Children? What to Expect From a Laminoplasty How to Keep Your Back in Good Health Do You Need Surgery for Osteoid Osteoma of the Spine? Acute Low Back Pain: When is it Time to See a Specialist? What Are the Different Types of Spinal Surgery? Pros and Cons of Surgical Treatment of Spinal Stenosis. Stay pain-free during the holidays!