54 yo male with ankylosing spondylitis and progressive kyphosis. 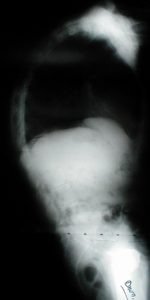 Post-operative Xrays
The patient was treated with a pedicle subtraction osteotomy involving resection of the L3 vertebral body and posterior spinal fusion and instrumentation from the T10 to the sacrum. Postop xrays demonstrate correction of kyphosis with LS curve measuring 54 degrees lordosis and restoration of spinal balance with SVA below 12 cm and normalization of chin brow angle.

How to Tell if You Have a Spinal Infection What You Need to Know About Metastatic Spinal Tumors  Thoracic Kyphosis Acute Low Back Pain: When is it Time to See a Specialist? Life after spinal fusion Do You Know Your Spine? Learn About Spinal Conditions and Treatments. How Poor Posture Can Cause Neck Pain Osteochondroma: Symptoms, Diagnosis, and Treatment What are the Signs of Scoliosis in Children? What to Expect From a Laminoplasty